The water features outside Beekman Tower sit in the plaza, which is open to the public. 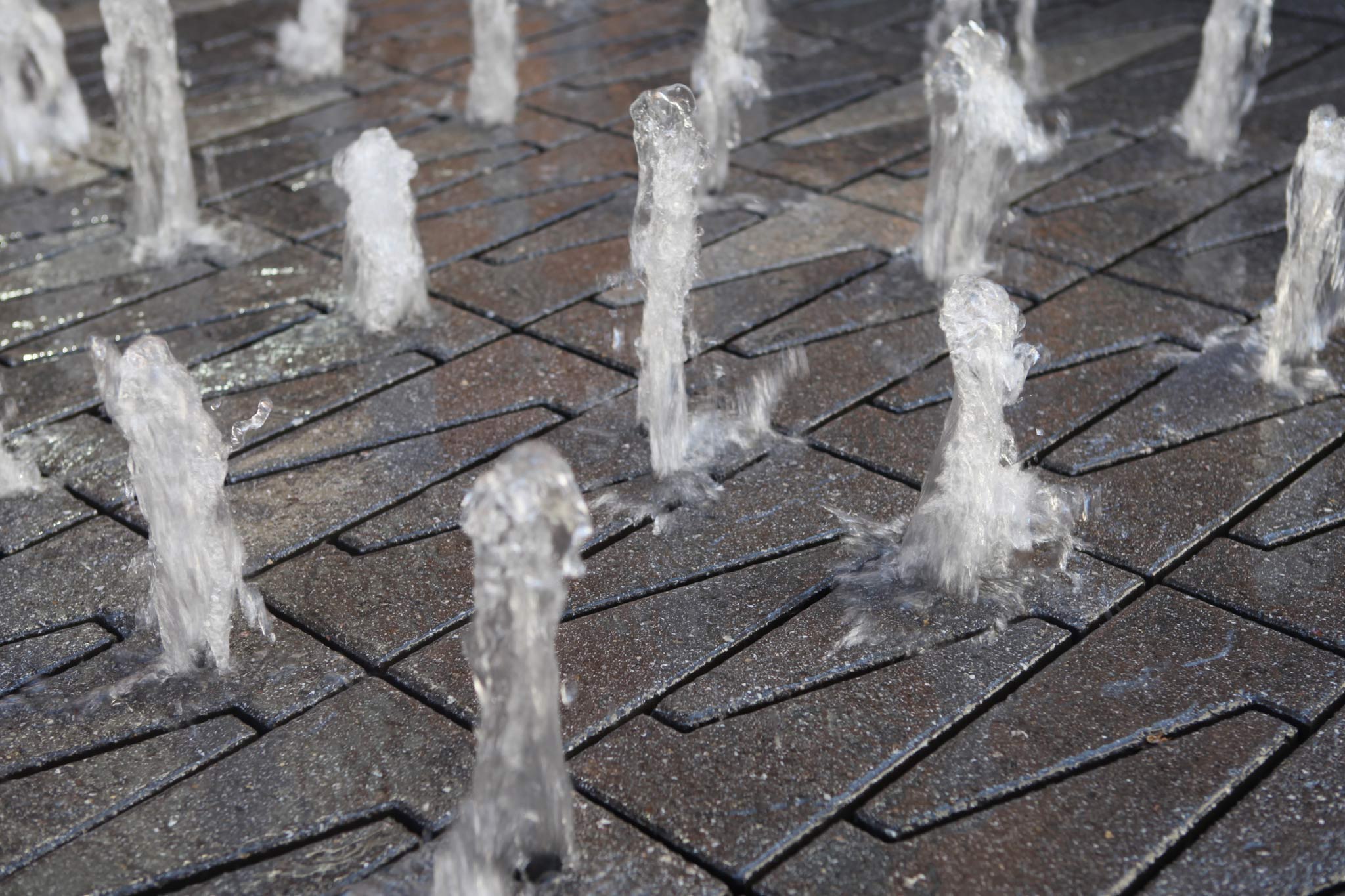 The water features were designed to blend in with the plaza pavers. Small holes were cut to allow the water to pass through. 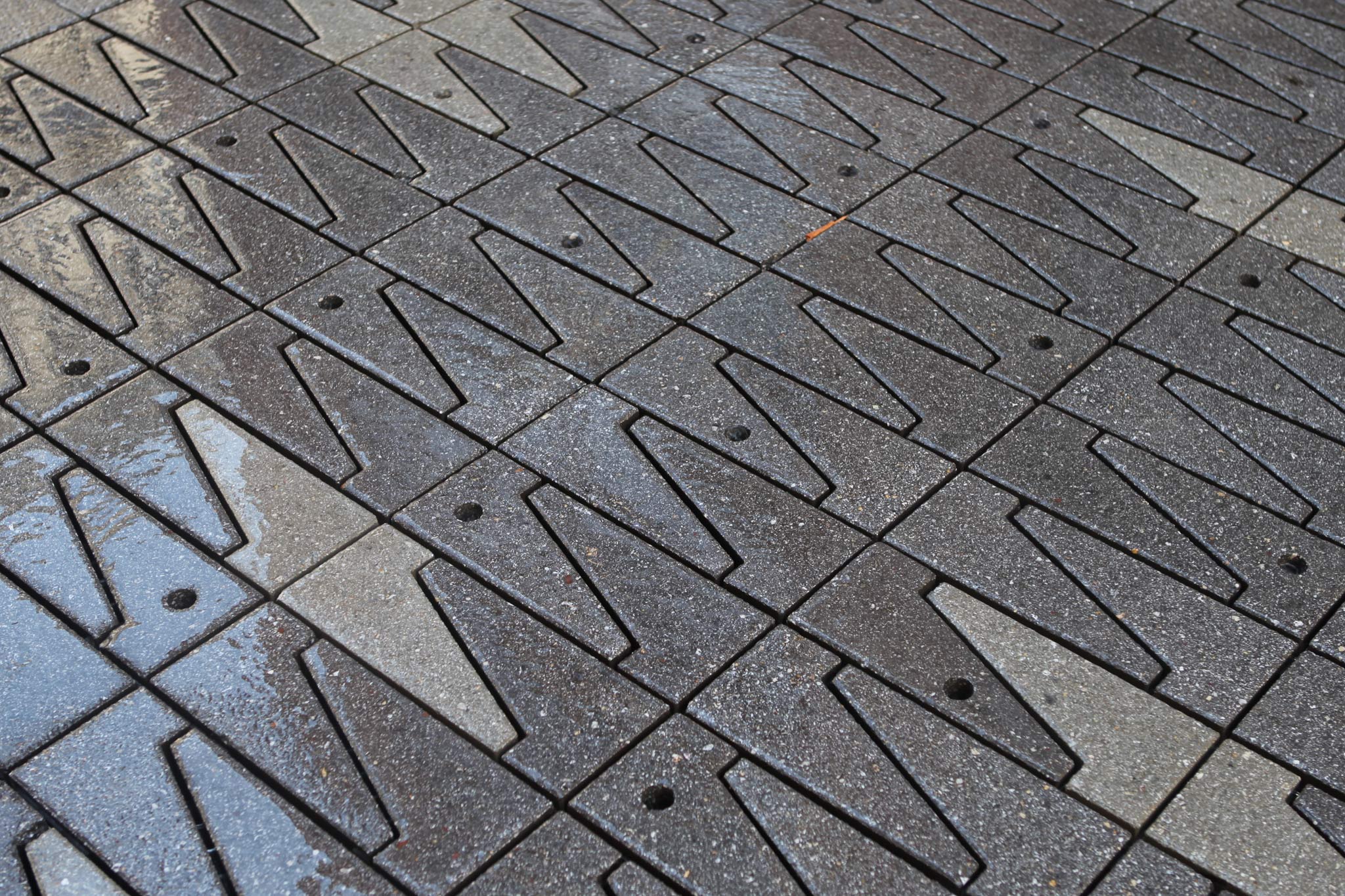 The water features were designed with 20 smooth bore nozzles, which create a clear, stream of water that pass through the holes in the pavers. 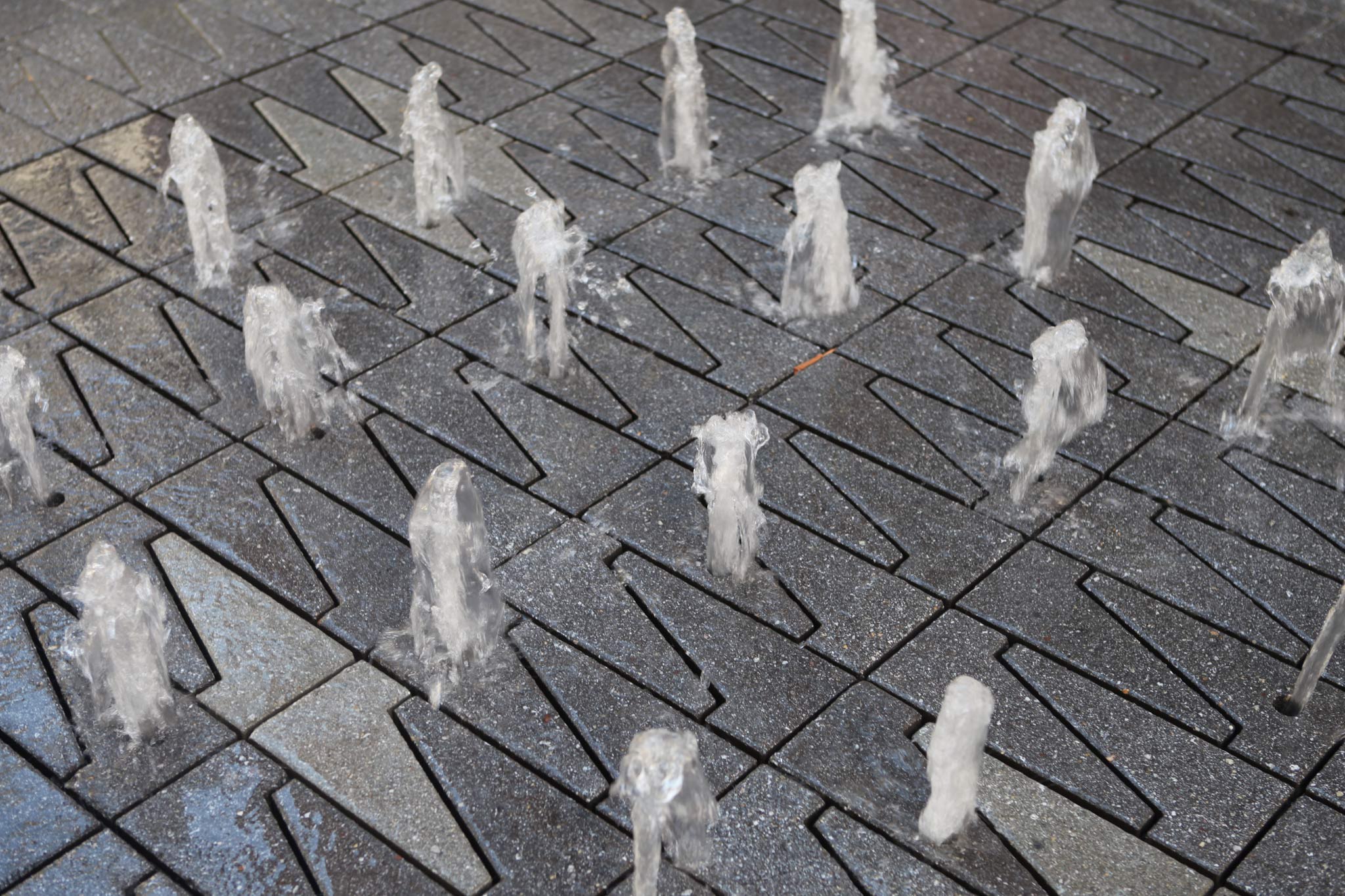 There are several small patches of water clusters throughout the plaza. 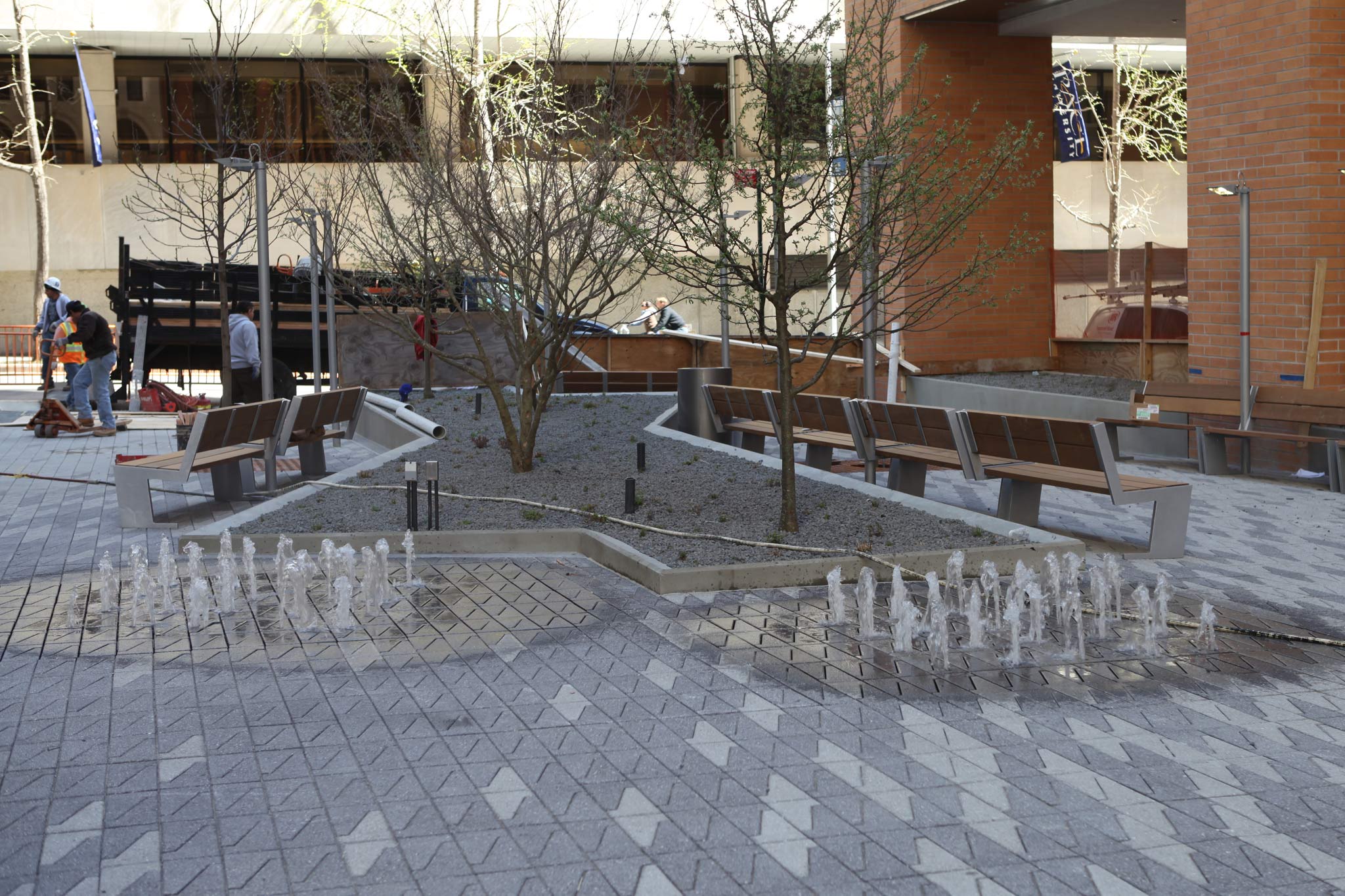 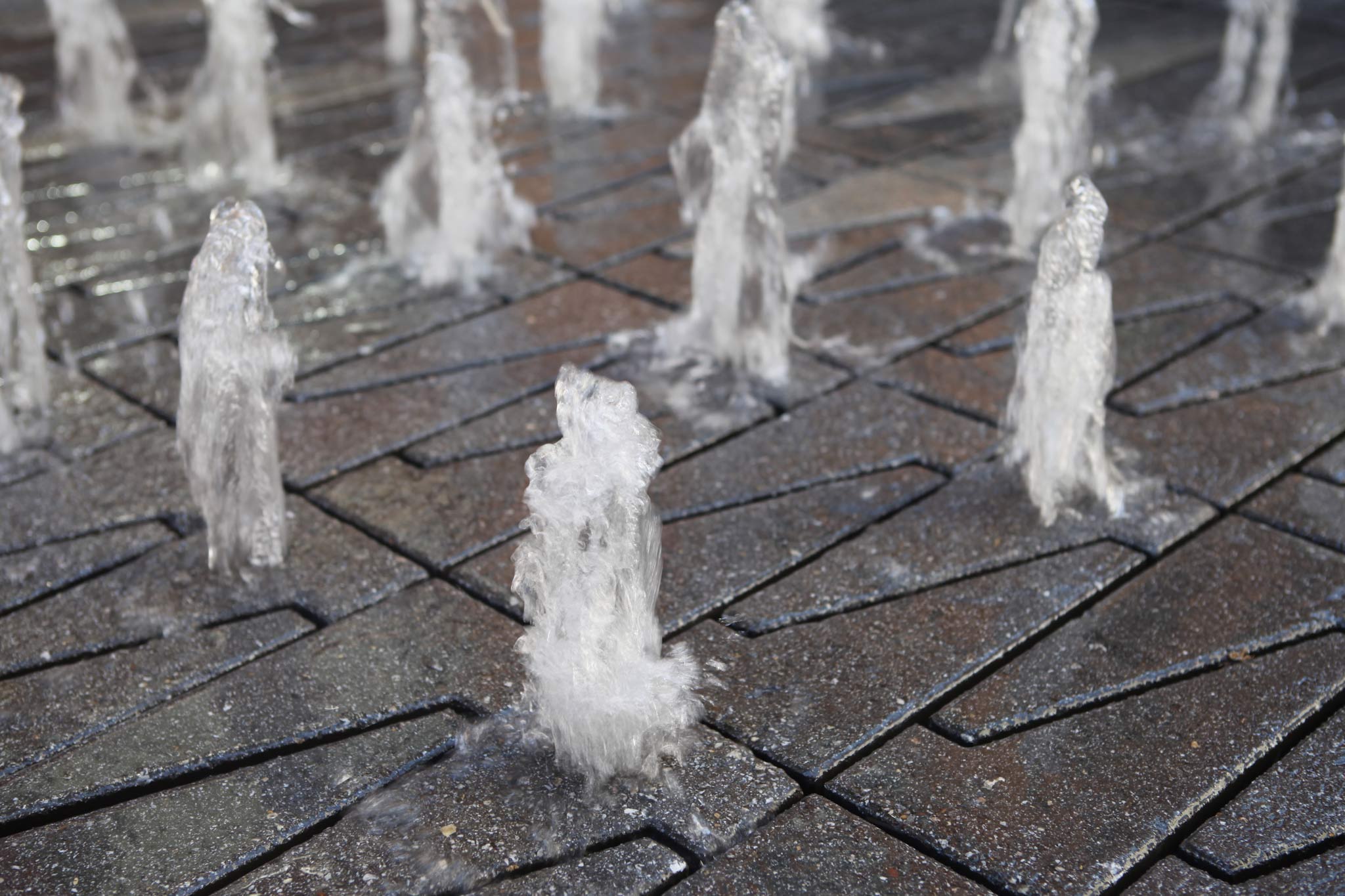 The Beekman Plaza fountains are located just outside Beekman Tower in New York City.  Delta Fountainsugh was called in to help the fountain designers and as the equipment provider. The water features consist of five separate zones of low height nozzles emanating from the pavement.  Each zone contains 20 smooth bore nozzles operating at a 1 inch display height arranged in a grid pattern. The zones are separate from each other along the walkway at the main entrance area of the building.

The biggest challenge for Delta was to design and fabricate a self-leveling nozzle so that all twenty nozzles on the manifold would be equal in spray height, without the aid of ball valves. Since the nozzles are covered by an intricate paver system, access to the nozzles would be very difficult for future maintenance.

Also, we were put to task to fit all of the specified equipment in a smaller than anticipated space.  Another issue that was not considered was that the protective screens for the Ultra Violet Sterilizers on each of the feature pumps were becoming clogged easily after the fountain ran for the first time. This caused major headaches for the maintenance staff at the tower. The fountain was ultimately shut down after a few months of operation because the maintenance staff literally could not keep up with the cleaning of the clogged strainers on a daily basis. The simple solution would have been to remove the screens, but that would be a potential disaster if something were to happen to the fragile quartz sleeve in the UV unit, potentially spraying shards of crystal from the nozzles.

For the nozzle, Delta went through an R&D process to develop different variations of the nozzle that would first allow the nozzles to equalize the pressure across the manifolds feeding them and secondly to have the ability to swivel to compensate for the sloped paver surface. We had three versions of the nozzle machined and tested. The initial specification called for the nozzle to be made up of several pieces. This however was very expensive and labor intensive for assembly. By making a few minor adjustments with the aide of our 3D modeling software, we pared the nozzle down to a three piece assembly using a machined nozzle and a readily available compression type fitting bringing the materials and labor cost for each nozzle down significantly.

For the mechanical room layout, Delta developed a scaled set of drawings, making sure that all of the equipment fit in the room including overhead conditions and still allow for required maintenance clearances for each piece as necessary. As the construction progressed, we were inundated with issues due to existing conditions.

The owner, after having become exasperated with the downstream UV filter screens asked us to get involved and come up with a solution to keep them from having to break apart the units and clean the screens every day. We designed a basket system that could capture debris from the surface as it flowed through the drain pipes in to the reservoir before it could be passed through the pumps. The basket system was easily retrofitted in the reservoir incorporating easy to use baskets that were lined with a super fine mesh screen and were suspended by rails spanning the reservoir. We used multiple baskets that were small enough to be pulled out and cleaned by the maintenance staff, without having to get in the reservoir. The mesh on the basket screens is tighter than the mesh on the UV screen ensuring that any minute debris that made it through the basket would easily make its way through the UV screen without clogging it. 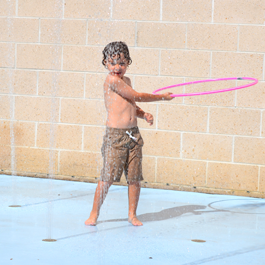 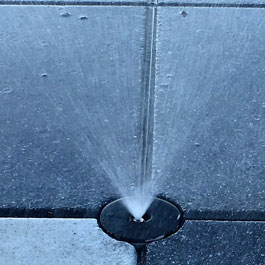 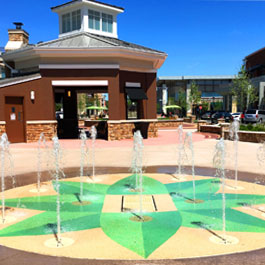 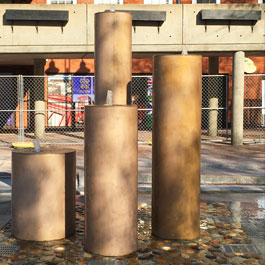